So what can I do for you? 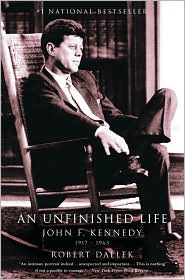 For a man who had a shorter term in office than all but six other presidents (Barack Obama not included), John Kennedy might be studied and written about more than any other 20th Century president. Robert Dallek, who also has written biographies of Franklin Roosevelt and Lyndon Johnson, produced a scholarly biography of a man who was at times heroic, at times hesitant, often sick, and almost always on the prowl for another sexual conquest. It’s a unique combination of detailed policy analysis with generous helpings of tawdry (yet, true) details of Kennedy’s life.

Dallek was given unprecedented access to Kennedy’s medical history and what he uncovered there turned out to be what this book will be most remembered for. For all the romance of “Camelot” or “The New Frontier,” underneath it all was a man, who was elected at at the age of 43 (the youngest ever elected), who was beset by numerous serious health problems and was treated by physicians in such a way that most of us would rather just take our chances with the local HMO.

So alongside the Cuban Missile Crisis, there are descriptions of crippling back pain relieved mostly by a series of painkilling injections by doctors with questionable credentials. We find out that Kennedy took, at times, sleeping pills, antidepressants, amphetamines, testosterone, and probably a few other drugs that most of us would blanch at taking. Yet through it all, according to Dallek, Kennedy remained lucid and clear in his decision-making.
For someone who was President during the lifespan of a lot of people reading this (I missed by two years), it is surprising to me how much mythology has built up around Kennedy. Dallek tries to strip away the mythology and show how Kennedy was able to propel himself so quickly to the highest office in the U.S.

John Kennedy was born into a wealthy Irish Catholic family in Boston. His older brother, Joseph Jr., was expected to be the political star of the family, but he died in a plane crash during World War II and it was left for the second son, John (called Jack throughout the book, there’s a lot of first name reference in the book so you can keep people straight), to fulfill the wishes of his father, Joseph Sr., to become America’s first Catholic president.

Dallek details the medical problems that hit young Jack when he’s in prep school and set him on a course for lifelong illness. Kennedy was beset by intestinal problems early on and Dallek goes into quite a bit of detail on this.

The problem, as best as I could figure out, was that Kennedy’s intestinal problems were treated with a strong regimen of steroids. The problem was that doctors didn’t quite know how much to prescribe. Or when to take it. Or when to stop. And the longtime use of these steroids (not the anabolic kind, but Kennedy would take those later), led to osteoporosis (and chronic back pain that required surgery) and Addison’s disease (a deficiency in the adrenal glands that was potentially life-threatening). And then there were also chronic problems with the prostate, which probably wasn’t helped by Kennedy’s promiscuity.

John Kennedy became a war hero for his efforts to save his crew aboard PT-109, although he had to have several strings pulled for him to get into the military. Most people with Kennedy’s maladies would have spent World War II behind a desk, but Kennedy knew the importance of having a combat background if he wanted to go into politics.

Back from the war, Kennedy ran for the House in 1946 and then moved on the Senate in 1952. Despite numerous hospitalizations in 1954 and 1955 for spinal surgeries, Kennedy still had a high enough profile to get himself considered as possible running mate to Adlai Stevenson in 1956. Joseph Kennedy actually tried to get Lyndon Johnson to run for President and have his son be his running mate, but Johnson did not think that the Democrats had much chance to win in 1956.

Soon after Stevenson’s loss to Eisenhower, Kennedy started positioning himself to run for President in 1960. Few campaigns have received more attention as they were multiple story lines.

There was the young, rich, attractive Senator from Massachusetts trying to overcome religious prejudice. There were Cold War overtones throughout. The Kennedy-Nixon television debates changed the way presidential campaigns were conducted. In the end, Kennedy won by a narrow margin over Nixon, thanks in part to some “interesting” vote counting in Illinois and Texas. Dallek attributes the closeness of the election to the hesitancy of many Southern Protestant voters to elect a Catholic. The 1960 election was set up nicely for the Democrats as there was a recession and Kennedy was able to outspend Nixon. (In general, Kennedys outspend everyone in elections. It’s a family tradition.)

After Kennedy’s famous inaugural address, Dallek starts to dissect the Kennedy presidency. There were many doubts if someone so young could handle such a big job. And at the outset, Kennedy definitely looked not up to the task.

Kennedy was faced with crises external, in Laos (where he chose not to intervene), and internally, with a civil rights issue with the Freedom Riders. And in April of 1961, Kennedy gave the go ahead to the CIA plan to remove Castro from power with a paramilitary force. That turned out to be what is known as The Bay of Pigs. And it was an utter failure.

Soon after, Kennedy ventured to Vienna for a summit meeting with Soviet leader Nikita Khruschev. Kennedy’s performance at this was widely criticized as the young president was not prepared for Khruschev’s belligerence regarding East Germany and Berlin.

On the domestic front, which Kennedy didn’t seem to care about as much as foreign policy, there were problems. The Kennedy administration was slow to take action on civil rights legislation because the Congress was still dominated by conservative Southerners in important positions, and Kennedy didn’t want to alienate an important part of his party that he needed if he wanted to be reelected in 1964.

Economically, the country was in a recession and Kennedy wanted to push through a large income tax cut, although opposition from conservatives (both Democratic and Republican) kept Kennedy from getting the complete package of reforms he wanted. Plans to increase Federal funding for education also went nowhere.

The biggest crisis of Kennedy’s administration was the Cuban Missile Crisis of October of 1962. It was perhaps the closest time ever that the US and Soviet Union ever came to a full-scale nuclear exchange. But, fortunately, Khruschev backed down from placing offensive weapons in Cuba and Kennedy opted not to follow the advice of his military advisers, who wanted an armed invasion of Cuba. This event, probably more than any other, secured Kennedy’s legacy, even though all he was doing was reacting to posturing by the Soviet Union. Of course, Kennedy and his advisers didn’t know if all Khruschev was doing was posturing or was really intent on war.

By 1963, Kennedy’s popularity was steadily increasing. He gave a speech at American University in June of 1963 where he made his case for nuclear disarmament to the Soviet Union. Soon after the speech, the first comprehensive nuclear test ban treaty was agreed to between the Americans and Soviets.

Later in 1963, Kennedy had a triumphant trip to Berlin, where he rallied the hopes of West  Berlin residents with his famous (although semantically incorrect) statement of “Ich bin ein Berliner!“

The final months of the the Kennedy administration (not that he was expecting them to be the final months) brought up one of the most troubling parts of that era: Vietnam. On November 1, 1963 Kennedy authorized the CIA to start a coup to overthrow South Vietnamese leader Diem, who was killed during the the military takeover. Dallek portrays Kennedy as being deeply troubled by the violence of the coup and whether or not U.S. involvement in that region would ever work. But would Kennedy have increased the military buildup in Vietnam to the point where it became what we know as the Vietnam War?

Before that question could be answered, Kennedy was assassinated in Dallas on November 22, 1963. And the answer to that question (along with many others) is still hotly debated.

So just what did John F. Kennedy do as President? What did he accomplish? In Dallek’s view, his primary accomplishments were: 1) standing up to Khruschev and the Soviets in the Cuban Missile Crisis and the negotiation of the Comprehensive Test Ban Treaty, 2) the development of the space program, which Dallek felt greatly improved America’s international standing, and 3) the establishment of the Peace Corps. Despite Dallek’s admiration for Kennedy, I doubt he would have rated Kennedy as high as the panel of historians C-SPAN assembled.

Obviously, some people are going to disagree with this assessment. For some, Kennedy will be the man who was more show than substance. He was a man who, in many ways, bought his way to the top. Kennedy didn’t get any major civil rights legislation passed (that happened in the Johnson Administration). He was a man who presented an image of a loving family man who was physically fit, when in reality he was very ill and cheated on his wife with women who were connected to mobsters.

It’s almost like John F. Kennedy is whomever people want him to be. If you’ve got the time to plow through an 830 page biography (it’s only about 700 pages of text, the rest of it is notes and an index), then Robert Dallek’s book is for you. It is not hagiography. It is not a hatchet job either. But like Kennedy, the book will ultimately reflect what you want it to be.

Other stuff: As you would expect, the John F. Kennedy Presidential Library is in Boston.

I attended John F. Kennedy High in Granada Hills, California. The 1994 Northridge Earthquake destroyed a couple buildings on campus and allowed ones that were slightly less ugly to be put in their place.

Kennedy is unique among Presidents in that he is the only one widely commemorated on the day he died, November 22, rather than on his birthday, May 29.

There are now two Senators who were born after John Kennedy’s death: Michael Bennett of Colorado and Kirsten Gillibrand of New York.

The New York Times review of this book was written by Ted Widmer, who wrote the Martin Van Buren bio that I had reviewed earlier. Van Buren and Kennedy remain the only two Presidents who were not partially English.

The next bio I will review will be shorter. So there may not be as long of a gap before the next review.