The Presidential election of 1928 was not a close one. Yet, it was memorable for the reason that the losing Democratic candidate, New York Governor Al Smith, was the first Catholic to be nominated for the Presidency by a major party. Although Smith’s religion was not the main reason he lost, it certainly didn’t help. And it gave Smith’s opponents, who distrusted him for his stance on the repeal of Prohibition and for being from New York City, even more ammunition to use against him.

In 1956, a political scientist named Edmund A. Moore looked back to 1928 and examined the election strictly in terms of Smith’s religion. It’s not a particularly relevant book to us today since: 1) a Catholic, John F. Kennedy, would be elected President in 1960, 2) there have been subsequent Catholic nominees for the Presidency and Vice-Presidency (John Kerry in 2004, Geraldine Ferraro as Vice President in 1984, and current Vice President Joe Biden), 3) Catholics appear all over the political spectrum now (Dennis Kucinich and Rick Santorum were both Catholic candidates in 2012.) and 4) there was a major party Mormon nominee in Mitt Romney and the U.S. was practically in a state of war against that religion during the 19th Century. America has come a long way in hating religion and we save our dumbest and most vile invective for Islam.

When we last saw Smith in 1924, his delegates at the Democratic Convention in New York successfully blocked the nomination of William McAdoo and forced the Democrats into nominating a compromise candidate, John W. Davis, who … did not win.

In 1928 Smith was the presumptive nominee. Anti-Smith forces decided that the best way to stop the Catholic “wet” governor of New York was to find a “dry” Catholic. Montana senator Thomas Walsh took a few delegates to the convention in Houston, but it was not nearly enough to stop Smith’s momentum. The Democrats finished their business in three days. Arkansas Senator Joseph Robinson was the Vice Presidential Nominee.

The Republicans were running the very popular Secretary of Commerce Herbert Hoover, who was generally considered to be the brains behind the very popular Calvin Coolidge. Senator Charles Curtis of Kansas was nominated for Vice President.

In 1928, American Catholics were a scary bunch to many for a variety of reasons, although not many of them made a lot of sense. There was a general fear of people who tended to live in big cities (as Smith did). There was a widely-held belief that a Catholic president would be more obedient to the Pope than to the American people.

Smith tried to react to the religious arguments against him, but he never could find the right approach. The problem facing him was that some of the arguments were so outlandish (like turning the White House over to the Pope) that it was hard to argue against something so outlandish without sounding foolish. Magazines like The Atlantic Monthly had long articles with discussions of Smith’s “Catholic problem.”

Another problem Smith faced was that with the focus on his religion as well as his opposition to Prohibition, nobody really knew what Smith’s positions on other matters were. Also, because Smith sounded “ethnic”, Republican opponents reveled in pointing out his lack of education and dearth of foreign policy experience as compared to the Stanford-educated and world renowned Hoover. (This book doesn’t discuss Smith’s positions on any matter in any depth.)

With the American economy booming, Smith faced an uphill battle in 1928. But, with Southern Democrats fearful of a Catholic because he was, for lack of a better word, different, Smith’s base of support was gone. Hoover routed Smith by a 444-87 margin in the electoral vote and by a 58%-40% margin in the popular vote. Hoover was able to pick off the Southern states of Texas, Florida, Virginia, North Carolina, and Tennessee. Smith even lost his home state of New York. The only states that Smith won were states in the Deep South with almost no Republican voters as well as two narrow wins in Massachusetts and Rhode Island.

Smith was hoping that by running in 1928, he would still be popular among Democrats and be considered a top candidate for 1932. That idea had one problem that Smith didn’t foresee. With Smith running for President, the Democrats found a new man to run for New York Governor. His name was Franklin D. Roosevelt, a longtime Smith ally. When 1932 rolled around, the two men were no longer allies. They were competitors.

American politics has never been pretty. Mud has been thrown since the Election of 1796. My impression from this book is that it was clear that there was a significant part of America that didn’t want a candidate like Al Smith to win. His Catholicism was just one facet of why people feared him. The fact that he was from a city, and not just any city, but THE BIGGEST CITY still left a good chunk of America afraid. If Smith hadn’t been Catholic, there would have been some other reason to go after his character.

The Election of 1928 showed that America was, for the most part, full of shallow, fearful bigots who were easily manipulated by more powerful forces. Would Al Smith been a good President? Probably not. After the election, Smith went to work for those same big business concerns that he campaigned against. The losers were all the people who were manipulated into believing the worst things about a large part of the American population. Or do the American people just prefer to be told whom to hate? 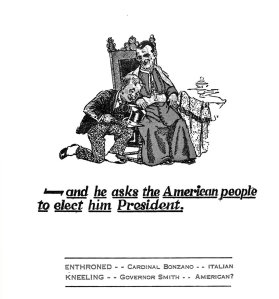