Vote for me! I’m not quite dead yet! 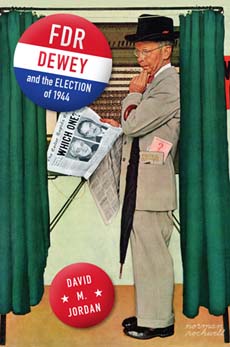 The  election of 1944 was actually somewhat anticlimactic compared to everything that came before it. Franklin Roosevelt, despite being in faltering health and overseeing the crisis of World War II, did not appear to have much trouble in defeating New York governor Thomas Dewey on Election Day. But, political observers of the time thought that the election would be close. And Roosevelt’s fourth win was far from a given.

David M. Jordan authored this entertaining book about an election that was much more about backroom deals and shrouded mysteries about Roosevelt’s health than it was about campaigning. There was a lot going on in 1944, more than people might realize.

Although Roosevelt did not officially announce that he was seeking a fourth term and would only accept a “draft,” he was making arrangements to get nominated and run again. All this despite his health failing to the point that he was sometimes unaware of his surroundings or was unable to finish sentences. This was caused by a heart problem that greatly hampered his circulation.

Roosevelt also felt that he needed to change his running mate. His Vice-President at the time, Henry Wallace, was considered to be too liberal and important Democratic fundraisers and donors were threatening to stay away from the campaign unless Wallace was off the ticket.

This set off a series of machinations to find a replacement. James Byrnes, serving as the head of some Roosevelt’s wartime economic commissions, was thought to be the first choice, but organized labor didn’t like him. Also, he was from South Carolina and was considered to be unpalatable to black voters. Finally, Byrnes was born Catholic, but converted to Episcopalianism, which made him unpopular with Catholic voters. Supreme Court Justice William O. Douglas was greatly admired by Roosevelt, but he was also considered too liberal. Also, Douglas did not seem particularly interested in the job, fleeing to Oregon on a hiking trip during the convention.

Party leaders then sold Roosevelt (more or less) and the convention delegates on Missouri Senator Harry S Truman, who had garnered some positive publicity by heading up a Senate Committee investigating cost overruns by war contractors. And so it was.

The Republicans had several candidates besides Dewey, who, like Roosevelt, said he would not run, but would only accept a “draft.” Nevertheless, Dewey was quite organized for someone who wasn’t running. He had advisors, including John Foster Dulles, a future Secretary of State, who helped transform Dewey from an isolationist into more of an internationalist.

Opposing Dewey were 1940 nominee Wendell Willkie, who headed up the liberal wing of the party. Willkie’s campaign stalled out early when he made an all out push to win the Wisconsin primary (one of the few at the time that mattered). Willkie campaigned throughout the state. He won no delegates. Willkie dropped out of the race. And he died before Election Day anyway, never endorsing anyone. It’s likely that, at best, he would have endorsed no one in the race. Willkie despised Dewey.

Harold Stassen, the ex-governor of Minnesota, who had left office to serve in the Navy, was the principal opponent of Dewey. But, his Naval service made it hard for him to gain any ground. General Douglas MacArthur was considered another possible candidate, but Army Chief of Staff General George Marshall ruled out any active serving member of the Army from running for any office.

The only candidate who was still around by the time the Republicans convened in Chicago in late June of 1944 was Ohio Governor John Bricker. Ohio Senator Robert Taft, a candidate in 1940, deferred to Bricker as the Buckeye State candidate. Also, Taft had to run for reelection to the Senate in 1944 and that proved to be difficult since he had been an opponent of U.S. involvement in World War II.

Dewey had a big edge in delegates by the time the convention started, but not enough to get a first ballot win. But, after some deals were struck, Bricker appeared on stage to tell his delegates to vote for Dewey. Bricker ended up with the second slot on the ticket.

With the country at war, campaigning was difficult. Roosevelt said he would not campaign like he did in his previous three elections. For the most part, Roosevelt was content to rest at the White House and monitor the progress of the war. However, Dewey began to hammer Roosevelt with a series of attacks on his conduct of the war.

Dewey said that Roosevelt was withholding supplies from MacArthur because he didn’t want to make him a viable candidate. Dewey also believed that Roosevelt wanted to extend the war as long as he could because the Democrats had no plan for finding employment for returning veterans. Finally, Dewey hinted that Communists and Socialists were supporting FDR.

Eventually, Roosevelt gathered enough strength to make two key campaign events. On September 23, 1944, he made a speech to the Teamsters at the Statler Hotel in Washington where he excoriated the Republicans as a party of isolationists and the party responsible for the Depression. He also artfully replied to a story stating that he had sent a Navy destroyer to pick up his dog, making some of the charges against him sound ridiculous. Democratic supporters were greatly encouraged by this attitude.

Then, on October 21, 1944, Roosevelt campaigned nearly all day, outdoors in a rainstorm in New York City to great acclaim. A long motorcade may have left Roosevelt drenched, but he seemed to enjoy the trip and doubts about the President’s health, which were well-founded, were put to rest for many people.

Dewey appeared to be gaining ground in the polls and received the majority of newspaper endorsements. However, in 1944, the newspaper industry was dominated by Republicans. Most publishers wanted Roosevelt out. However, they failed to take into account that Roosevelt was still enormously popular with most of America. Dewey had a hard enough time being popular among his own party regulars.

While most people thought that the election was a tossup on Election Day, 1944, nearly everyone on Roosevelt’s campaign team were not worried. They expected to win by nearly the same margin as 1940. And they were right. Roosevelt picked up 53% of the popular vote to Dewey’s 46%. Roosevelt won 432 electoral votes to Dewey’s 99. The biggest state to switch over to the Republicans was Ohio, but the Democrats were able to flip Michigan back to their side.

The Republicans in 1944 were either overly optimistic or incredibly naive to think that they had a chance of unseating Roosevelt. One thing that likely would have helped a Republican win would have been for Allied fortunes in the war to turn badly. But, that did not happen. During most of the campaign, people spoke about “when” the war would end, not “if.”

Another issue that would have aided the Republican cause would have been a full disclosure about Roosevelt’s health. Many people close to the President felt he had little time left. His personal physician who traveled with him was an ear, nose, and throat specialist. Eventually, cardiologists were called in. Despite numerous heart tests being administered to Roosevelt, along with chest pains, the President did not seem to be particularly bothered or curious about what was happening.

Franklin Roosevelt died just 83 days into his fourth term. Harry Truman, someone who barely knew Roosevelt, and only became Vice President because he was the least objectionable choice, inherited the leadership of the United States just as World War II was entering its crucial final days. Thomas Dewey went back to being governor of New York. Their paths would cross again. 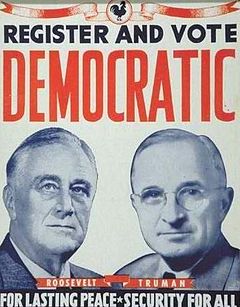